The end of the trip? 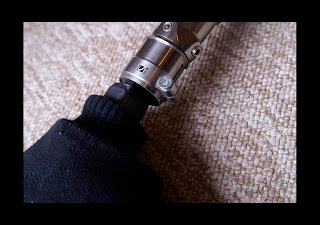 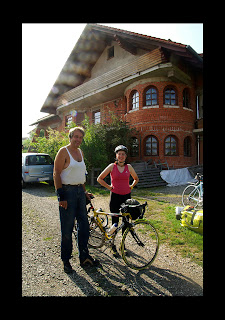 Kaisa stared at her foot with disbelief. What should have been one part was now two. The foot part of the foot was or one reason or another all loose - something it definately should not have been.

Thoughts raced through her head - where would the closest prosthetician be? Frankfurt? Fulda? Somewhere else? And how would she get there? Did the trains run to any reasonable place from Sontra? Or should she have her spare foot sent from Finland by some delivery company? And how could something like this even happen? So many questions at only half past eight in the morning. To big a problem too early in the morning.

Upon closer inspection the problem became clear. Leka had fetched the Crank Bros. universal bike tool and had located the culprit. One of the bolts holding the parts together had broken. Literally snapped in two. A little meddling with the Victorinox pliers helped remove the part still stuck in the hole.

In a sense this was good news. Now only a suitable spare part was needed. Good luck with that in a small village in the middle of the German countryside with no viable means of communicating anything beyond "entschuldigung, ich bin Leka".

But as emergency knows no law Leka marched downstairs and knocked on the host's door.

"Wir haben ein ganz gross problem" he said holding the foot and the broken bolt in his hand.

Unaffaced, the big man who was our host asked Leka to put his shoes on and meet him at the garage door. When the door opened an amazing variety of junk and stuff and tools and what not met the eyes of Leka. From what little he understood the man apologetically explained that its good to have a work space, but it's not so good that you can't seem to fit into it.

In a blink of an eye he had manifested from one of the overpacked shelves a mauser tool, and measured the bolt to be 6 mm thick. And wouldnt you know it, just on the table in front of us there where three bolts of 6 mm thickness lying around. The first one tested didn't quite fit - the bolt at the end was too bulky to fit the intended purpose. The second on the other hand - with a phillips head which was just what the doctor ordered.

The do-it-yourself host smiled as only a man who has about everything you can imagine smiles. If you supposedly had to fix a nuclear reactor before core meltdown and needed some plutonium rods I guess this man just might have a few extra ones tuckesd away in some remote corner of his Bavarian-styled chateau in the making.

Borrowing a screwdriver Leka headed upstairs. Where Kaisa was already surfing the Bundesbahn site for an easy way out. But to no avail, the call of the road was too strong for a minor disruption such as a broken foot to hinder the march onwards. The angles of the feet were compared and the screw was tightened as hard as Leka dared (and as hard as the Crank Bros. tool allowed without breaking either).

Now lets take just a moment to think about the odds of the events:

A. We actually weren't headed for Sontra yesterday, but had to stop there due to the extreme rain fall.

B. The place we stayed in was not the first place of choice for us, but that place didn't answer their phone.

C. The host was unwilling to have us over just for one night, but Kaisa's pleading softened his heart in the end.

D. The bolt's breakig down when it did. Should it have happened any earlier or later we would have been in real trouble. I don't even want to start imagining what would have happened if the foot had disintegrated in the middle of heavy trafic...

E. The host being a DIY-man with every imaginable tool and piece of equipment at a hands reach. Plus a really nice guy all in all - although I understood only maybe a third of what he said.

Too many coincidencees if you as us - our guardian angels are truly working over time. With no extra reimbursement, I'm afraid.

An hour after our off road repair session the two of us rolled out of Sontra. Born to be wild, indeed.
Posted by Kaisa & Christoffer Leka at 2:56 PM