Thanks, Georg, Philipp, Philipp and Simon! 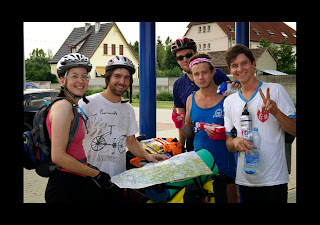 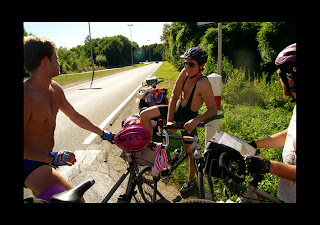 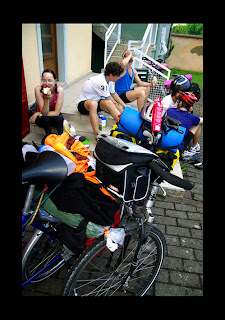 Kaisa was studying her map and some road signs when four young men biked past her, happily shouting "Bonjour!". Moments later we overtook them as they were themselves asking for directions. And a few moments later they caught us again. We found out that they were Germans on a trip from Stuttgart to Lyon, and we had the same goal for the day: Mulhouse.

When talking with the Germans we couldn't help but notice how easy it was to bike in a bigger group, not having to take on all the wind yourself. (Naturally we're talking about head wind here, the standard weather condition of this trip...) It was clear that they were keeping a faster pace than us, about 25 km/h compared to our 20 km/h but we spontaniously decided to try to bike for a while with them.

Thus our safe and sensible trip temporarily turned into an adrenaline-filled adventure, where the villages flashed by and kilometres kept piling up. The boys were fast, loud and funny, and we had a great time biking with them. Aerodynamics is interesting stuff: Kaisa was easily doing 25 km/h on a flat road with head wind just because she had four Germans biking in front of her. (Here's a tip for anyone planning a bike trip: take four guys along to handle the wind for you, and things will go super smoothly!)

In the evening we parted paths, as we decided that 130 km was enought for the day, and the boys continued towards Besancon and a camping site that might or might not be found on the way there. Who knows, maybe they're still on the road as a write this, changing clothes in the middle of the road, riding with no hands, tuning in the radio for some entertainment. We've returned to our safe routines, but it was pretty cool to notice that we actually have it in us to go a bit faster, in the right company.
Posted by Kaisa & Christoffer Leka at 1:27 PM