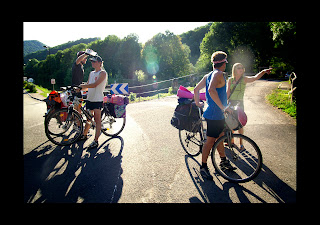 There are many ways to travel by bike. And with our encounter with the four Germans we concluded that we belong a the school that might be called rational. Or boring, depending on your point of view. Where as our friends from Stuttgart most definately belong to the school that can be named passionate.

For when our ways parted yesterday we thought we would not meet again. They continued biking for what they expected to be some 30 more kilometers, after which they would sleep in the woods. As for us, we went to take rest at another cheap hotel.

Then imagine our surprise when around 6.30 PM we hear lots of noise behind us and find our four friends engaged in their usual bickering while rolling on at high speed forward. While we had gone the way of the turtle, slowly but surely making our day's progress, these guys clearly had the rabbit's mental disposition. They appparently awoke at around 11 or 12, got on their bikes, and continued to cause havoc on the French roads. And were a bit shocked upon hearing that we had gotten up at seven. It seemed that they found it a bit unatural, to say the least.

Yes, both schools eventually will get where they are going, but the style differs quite some. We left them inside a local supermarket, where they where emptying the shelves with enviable determination.

Have a good night boys, where ever you are! Who knows, maybe our paths will still cross.

PS. Note the makeshift shower in the left part of the picture. These guys are nothing if not spontaneous and willing to try anything once.
Posted by Kaisa & Christoffer Leka at 2:02 PM